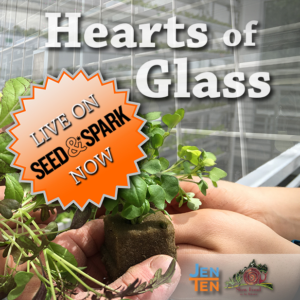 Jackson, WY – Slow Food in the Tetons recognizes the power of film to educate and effect change through great storytelling. They are teaming up with award-winning filmmaker Jennifer Tennican to follow the critical first year of Jackson’s controversial, cutting-edge greenhouse, Vertical Harvest. This innovative business intends to provide year-round fresh produce and to employ individuals with disabilities.

The collaboration, a one-hour broadcast-quality documentary, is titled Hearts of Glass. The film is a program of the Jackson non-profit and is being produced/directed by Ms. Tennican. “I’m impressed by the quality of Slow Food’s programming and community outreach around local food production, so it’s a delight to be partnering with them on this project,” said Tennican. She continued, “They are focused on the intersection of food and community and that focus is central to Hearts of Glass.”

Slow Food in the Tetons works to grow the sustainable food economy in Jackson, Wyoming and the surrounding area by supporting producers, educating consumers and connecting them together in the spirit of good, clean and fair food. Hearts of Glass supports their mission by highlighting local food production and the relationships between producers and consumers. The film will also touch on the need for education around healthy, sustainable food choices and fair treatment of the individuals who grow our food.

Ms. Tennican said, “It’s exciting to step into the unknown with this innovative business. We have amazing characters with a lot a stake personally and professionally.” Ms. Tennican will tell the story from various points of view – food producers and consumers both inside and outside of Vertical Harvest. “We are excited to include the voices of some of the employees with disabilities and their family members . It’s an opportunity to allow some less-visible community members to tell their own stories and raise awareness about an underemployed population.”

JenTen Production’s last two documentaries, The Stagecoach Bar: An American Crossroads and Far Afield: A Conservation Love Story, were about hyperlocal subjects, but resonated well beyond Jackson Hole and Wyoming. Both films were distributed nationally by American Public Television, with Wyoming PBS as the presenting station. We believe that Hearts of Glass will appeal to an even wider audience due to the current worldwide interest in local food production, sustainability and the disability rights movement.

Slow Food in the Tetons and JenTen Productions are excited to announce a crowdfunding campaign for Hearts of Glass on Seed&Spark. Seed&Spark focuses exclusively on film projects. It’s a one-stop platform that allows filmmakers to find funding, audience and distribution.

The timing of Hearts of Glass’ campaign is fortuitous because it puts Hearts of Glass in the running for additional funding and distribution through The Untold Story Crowdfunding Rally, a partnership between Seed&Spark and Project Greenlight Digital Studios. The rally is for feature documentaries in production whose focus is a story an audience has never seen before.

Hearts of Glass needs to raise $20,000 (80% of the funding goal) and have at least 500 followers by the end of the 30-day campaign to be competitive in the crowdfunding rally. Followers can be financial supporters or those who sign up with their email to the campaign by clicking the follow button on the campaign page. In order to make it to the finals of the rally, Hearts of Glass has to be one of the top 10 most followed projects by July 1st, the rally’s end date.

Slow Food in the Tetons and Ms. Tennican are taking advantage of an opportunity to raise funds for the film and awareness about local food production, innovation, sustainability and disability advocacy. Ms. Tennican said, “the possibility of these interest groups overlapping on a project like Hearts of Glass is exciting – we love the idea of deepening existing community connections and creating new ones .”

Scott Steen, Director of Operations of Slow Food in the Tetons, added, “This project will help us achieve our organization’s long term goals by raising awareness about local food options in our mountain town . It will encourage us to prioritize the role of good, clean and fair food as part of a sustainable community.” Donations to the film are tax-deductible through Slow Food in the Tetons.

Hearts of Glass has received grant funding from the Wyoming Humanities Council and the Center of Wonder. Grant funding from the Wyoming Arts Council and the Wyoming Governor’s Council on Developmental Disabilities is pending. Business sponsors include First Interstate Bank, Prugh Real Estate, RE/MAX Obsidian Real Estate and Energy Conservation Works. In addition to grant monies and sponsorships, a core group of private donors has pledged their generous support, giving the project momentum as it enters this crowdfunding campaign.

Find Us on Social Media

About Slow Food in the Tetons

Slow Food in the Tetons, a Jackson-based nonprofit, works to grow the local and regional sustainable food economy by supporting producers, educating consumers and connecting them together in the spirit of good, clean and fair food. Slow Food achieves its mission though events and programs like the Wednesday People’s Market at the base of Snow King, the Youth Culinary Project farm to table cooking classes for kids, The Teton Slow Food Guide, Taste Education dinners, the Teton Food Tour community bike ride, the Lockhart Ranch Party and more. To find out more about Slow Food in the Tetons, visit tetonslowfood.org

Jennifer Tennican studied video production and documentary film in the late 1990s in Boston before moving to Jackson, Wyoming in 2002. Most recently she directed and produced, Far Afield: A Conservation Love Story, an award-winning documentary about 91-year-old Jackson Hole conservation icon Bert Raynes. The program is being distributed nationally by American Public Television and Wyoming PBS is the presenting station. Approximately 200 public television stations in 40 states and the District of Columbia began airing it in April. Ms. Tennican also directed and produced the award-winning The Stagecoach Bar: An American Crossroads. This hour-long documentary was also distributed nationwide by American Public Television and presented by Wyoming PBS. Aired on 158 stations in 31 states and the District of Columbia, the film explores 70 years of cultural change in and around Jackson Hole.

Next Post: Donate then Celebrate the Successful “Hearts of Glass” Crowdfunding Campaign »